Welcome to the Reduce FOG (Fats, Oils, and Grease) Website!

This is the wastewater treatment website for Custom Biologicals.

This site has information about a variety of bacterial products manufactured by CustomBio.

On Reduce FOG  you will find information about:

Additionally, Reduce FOG contains links to some of the other microbial products by CustomBio.

The microbial products manufactured by Custom Biologicals are applicable to  number of different industries such as:

Elevator shafts have a number of odor problems, including urine and feces. These problems can be solved by using beneficial microorganisms such as those contained in Custom GT Tabs. 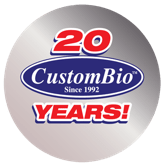 their ability to rapidly metabolize the organic materials, such as urine, that cause  the odors. Unlike chemical masking agents, bioremediation of odors actually digests and eliminates the odors.

The bioremediation of odors has a number of industrial applications such as: elevator shaft odor control, car wash recycle water odor control and oil water separators.

Custom Biologicals’ GT Tabs product is a live synergistic blend of selected microorganisms specifically chosen for their ability to rapidly metabolize organic material into carbon dioxide and water. The bacteria in Gt Tabs actually digests and eliminates the odor at its source rather than merely masking or attempting to chemically neutralize the odor.

GT Tabs controls odor in different ways depending upon the origin of the odor. If the odor is produced by indigenous bacterial decomposition of organic material such as sewage or urine, the bad odors are produced because bacteria incompletely oxidize and degrade organic compounds, such as proteins, carbohydrates, and starches instead of completely oxidizing them to carbon dioxide and water.

In this instance, GT Tabs works on a competitive principle called competitive inhibition. By applying GT Tabs, selected microorganisms are added at approximately one million times the concentration of the indigenous bacteria. The microorganisms in GT Tabs utilize essentially all of the available organic material and oxidize it to carbon dioxide and water. The indigenous bacteria are so outnumbered that they cannot successfully compete for available organic material. This greatly restricts their growth and also greatly diminishes the emission of organic compounds that produce the characteristic odor. The small amount of incompletely oxidized organic material that they may still produce is quickly utilized by the microorganisms in GT Tabs further reducing the odor.

If the odor is caused simply by, the presence of an organic compound the microorganisms in GT Tabs will rapidly degrade the organic chemicals destroying the odor. Examples of this type would be non-hydrocarbon chemical spills, industrial wastewater, agricultural waste, fish and other food preparation.

All of the bacterial species utilized in GT Tabs are Class 1 bacteria, as defined by the American Type Culture Collection (ATCC). Class 1 bacteria are, by definition, non-pathogenic and non-opportunistic. These organisms are safe and will not cause infections or ill effects in humans, animals or plants. The United Sates Department of Agriculture (USDA) has approved this blend of organisms for use in USDA federally inspected facilities, including food production plants. Each organism has been approved by the microbiologists at the USDA laboratory and every production batch is certified to be Salmonella-free.

Bacteria are considered prokaryotic organisms as their genetic material is not enclosed in a special nuclear membrane and they normally reproduce by the process of binary fission, one cell asexually splitting into two. Bacterial cells may be spherical or spiral but the majority are rod shaped (cylindrical) and are about one micron wide and 2 microns long. One micron equals 0.001 millimeter. For classification and identification purposes, bacteria can be divided into two large groups, Gram positive or Gram negative, depending on their reaction to a specialized staining procedure.

Bacteria as living organisms have certain chemical and physical growth requirements. The basic knowledge of these requirements is especially important in considering bioremediation and odor control.

Bacteria are prokaryotic organisms that reproduce primarily asexually by a process known as binary fission. One organism splits into two organisms and each one is capable of reproducing further. The principle of bioremediation is based on the tremendous growth potential of bacteria with the binary fission process. For illustration purposes, lets consider the growth potential of one single bacterial cell, assuming a 20 minute generation time, for a few hours.

In little more than 6 hours the population has increased over 1 million fold. This tremendous growth rate is the secret to successful remediation. In the case of odor control bioremediation, the odor causing compound is used both as a carbon source and an energy source to produce the million fold increase in cell mass.

Bioremediation of Odors for Elevator Shafts.

A Case study in Thailand

Odor Control fizzytabs are a unique product designed and developed by Custom Biologicals.

Fizzytabs contain billion of beneficial, odor eating, microbes. These microbes attack the source of the odor. There are no masking agents used. Fizytabs are a unique, effervescent tablet.

This case study is a look at a unique use for odor control fizzytabs.

Contact Custom Biologicals at (561) 797-3008 or via email at Bill@Custombio.biz for more information.

Sale on Septic Fizzytabs for June 2015 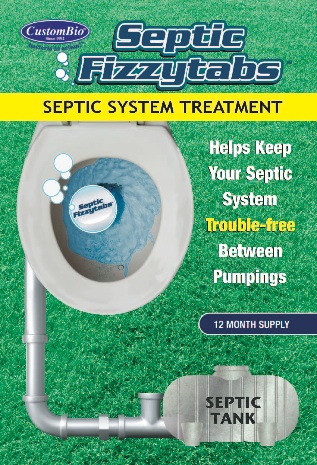 Septic Fizzytabs are a once a month Septic tank treatment designed to keep your septic tank running smoothly between pump outs. And now – FOR JUNE ONLY – you can get $10 off a yearly supply of 12 fizzytabs. A yearly supply only costs $29.99. The $10.00 will automatically apply at checkout. Here’s the link – CLICK HERE.

Don’t you hate it when a product goes on sale and then they increase the mysterious handling fee. Or charge $20 shipping on a ten dollar item.

Well Septic Fizzytabs are $29.99. There is NO handling charge and NO US Shipping Charge.

Septic fizytabs are a unique, once a month septic treatment. Simply remove a tab from the container, drop into the toilet, let dissolve, and flush. That’s IT!

Why so many international distributors? Well, we try to make it easy for our customers to

do business with Custom regardless of their location, but there are several distinct advantages to becoming an international distributor of Custom Biologicals.

Advantages for International Distributors of Custom

Custom Biologicals allows private labeling and rebranding of all of our products. Exclusive Agreements for some countries are available. Minimums and some restrictions may apply.

3. A Wide Variety of Biological Products

Custom has a wide variety of biological products that include:

The purpose of your business is to make money. Custom’s product line allows for a high profit margin.

Contact Custom Biologicals today to discuss how to become an international distributor.

Problem: 275 gallons of heating oil located in the basement were spilled when an automobile struck the building. The basement was a dirt surface and about 900 square yards were affected. TPH levels ranged from 3500-9800 ppm.

Custom Treatment: The recommended dosage of Custom HC was applied directly on the dirt basement floor. Bio-nutrients were also added.

Custom Results: The following averages were obtained after six weeks of treatment.

As of the date this case study, the Pennsylvania Department of Environmental Resources (PA DER) had established standards for hydrocarbon contaminated soils of 200 ppm TPH. The final sample results are well within this criteria; therefore, no further corrective action was warranted for this site.

Know and follow the local and state laws when using the small spill kit.

Custom Biologicals can be reached at (561) 797-3008 or via email at Bill@Custombio.biz. Distributor and dealer inquires are welcome. Domestic and international companies are encouraged to contact us.

Climate Change, Can We Change?

Ecosystem restoration is a pressing issue in fragmented rainforest

Why is Trichoderma Harzianum used on Crops?

The Effect of Microorganisms on Plant Growth